Getting back to the idea of having fun mentioned in a previous post... On our trip to Death Valley last year, I brought colored LED lights to play with. 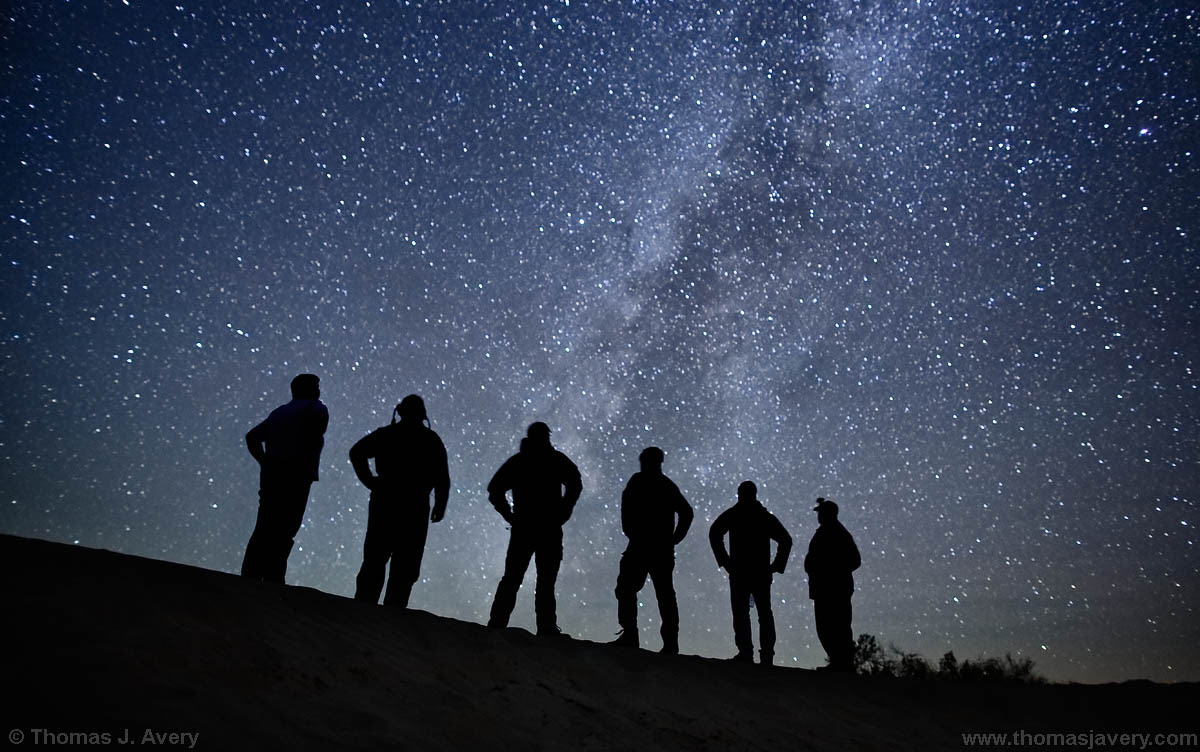 6 Photographers on a Dune

But first, we had fun with ourselves. This was take one hundred something. Seems like it took forever to get the group just right, and then we had several shots trying to get our postures and body positions right AND keep still through a 25 second exposure.

Spinning lights on a string 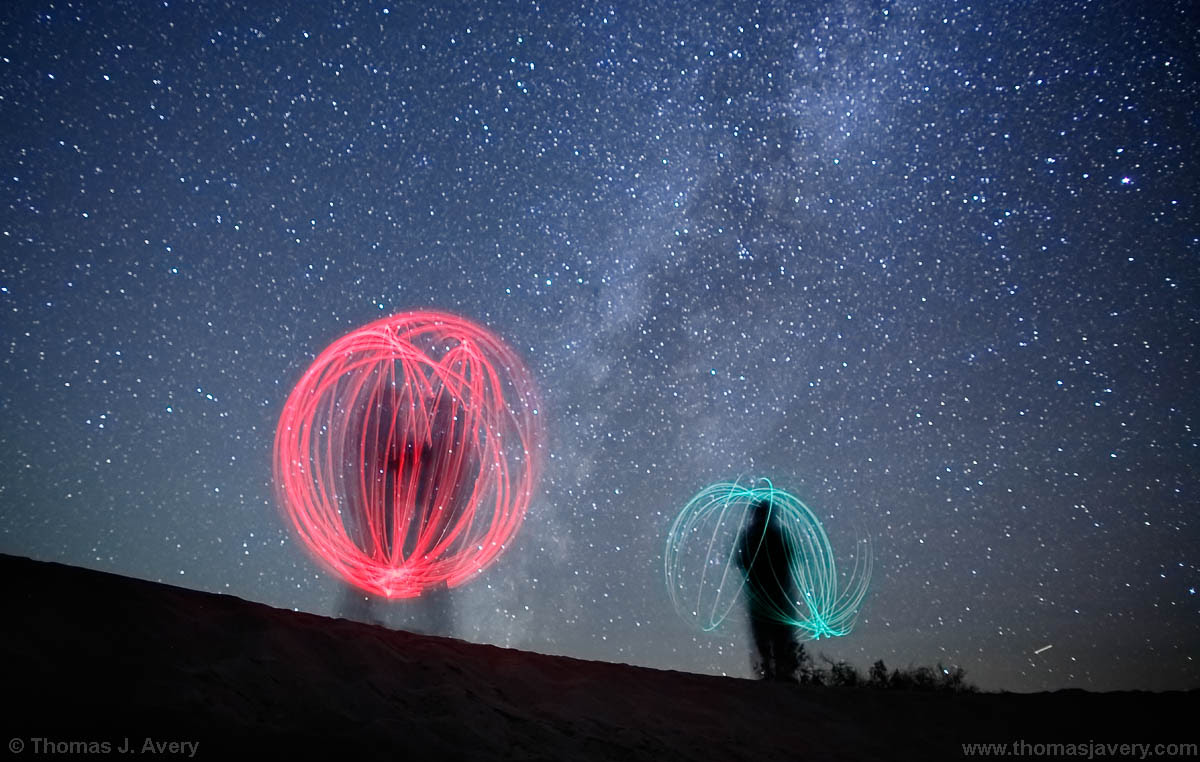 Light Spheres on a Dune

That was it. Simple. Put a light on the end of a string and spin it around. 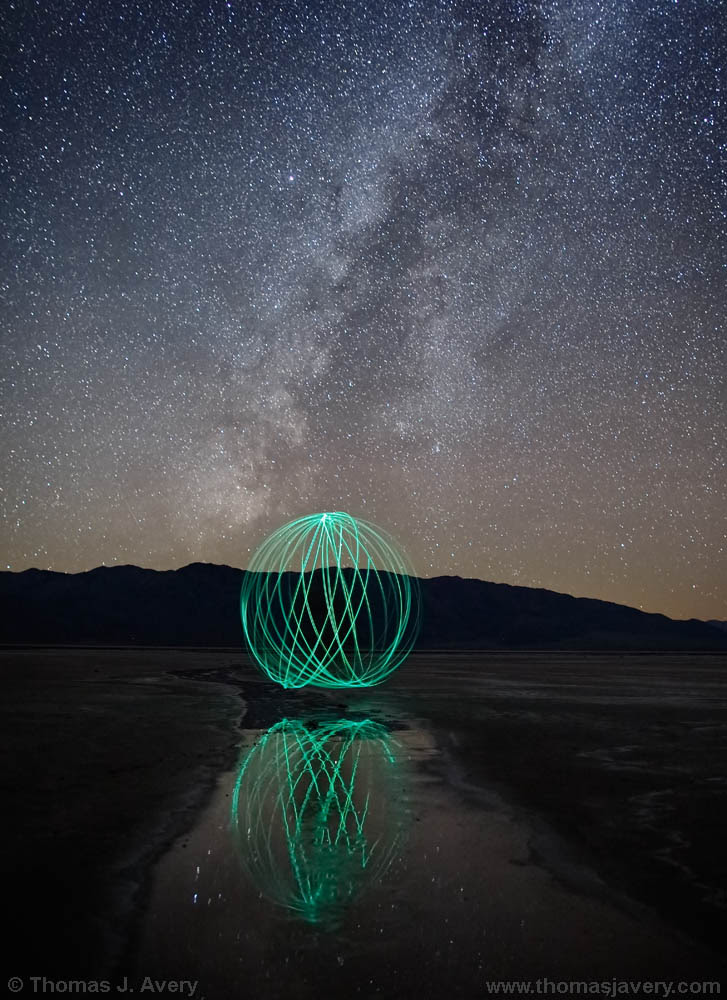 Although the lights were initially WAY too bright. Remember, these are highly sensitive exposures that pick up starlight.

For some strange reason, I had a spare white sock with me and also some tape. I cut apart the sock and taped bits of it over the light to diffuse and reduce the intensity.

The light spheres are fun, and there are probably a hundred other patterns that you can make while spinning a light on the end of a string. 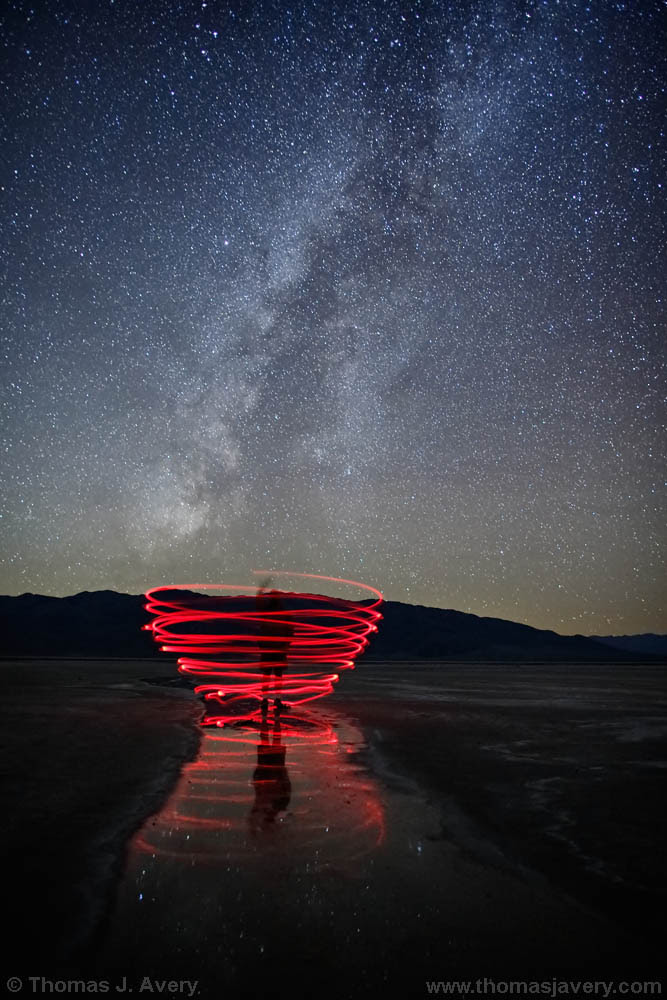 My favorite was the tunnel made as I spun the light in a circle in front of my body while walking towards the camera. 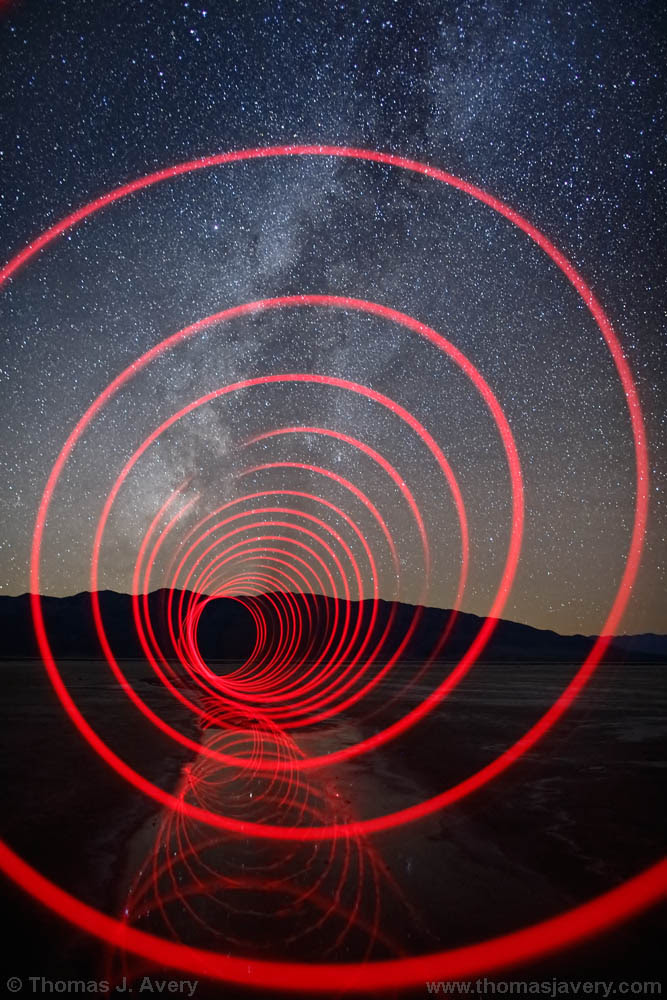 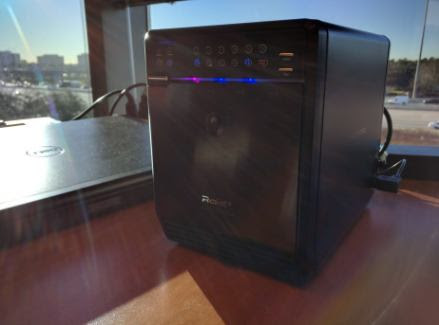 This is the new black box of bytes (Mediasonic HFR2-SU3S2) sitting in a remote location (my office). In addition to a new 2TB drive, I also got a 4-bay enclosure to house it and also the other two existing 2TB drives that I have. So, now it's three 2TB drives in one box (with an open slot for adding a fourth drive later on).

Hopefully this is enough to fulfill my storage goals for the next 3-4 years.

I recently bought a used BH-55 ballhead. I'm fulfilling an eight year old equipment need to have a tall, robust but lightweight tripod and head.

Actually, I have a large, robust tripod but it weighs just shy of half a ton. Well, probably not quite that much, but that's what it feels like on long hikes.

The used BH-55 came to me looking well used and dirty. That's okay, RRS makes great products, and I knew most likely the head would be perfectly fine.

For reference, I've had a BH-40 for about eight years now. I've used it quite a bit and abused it some. It's had several hard knocks and the battle scars to prove it. It continues to work perfectly.

I decided to take the well-loved BH-55 apart and clean it thoroughly. The head was difficult to rotate down into the front two slots, even with the tension (drag) setting reduced. There was a lot of gunk and debris built up around the ball.

First step was to remove the panning base. There are four small screws on the bottom that must be removed. This is a great video that shows how to do it: youtube.com/watch?v=pZFAaUT7fnA.

Note that the following images were taken during re-assembly. So that explains why it looks clean :-)

As shown in the video, you have to remove the small brass bushing. It will slide straight out, but you may need to knock it around a bit to free it. 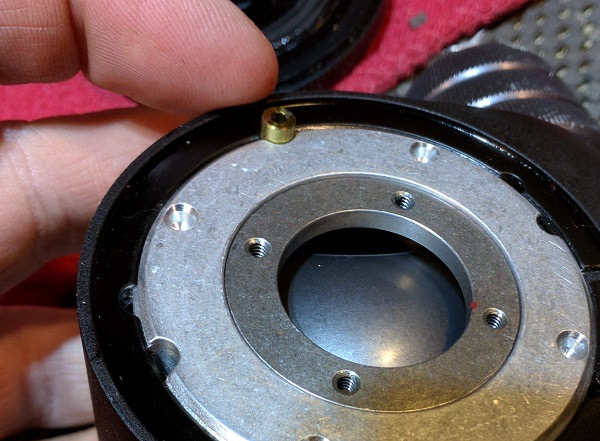 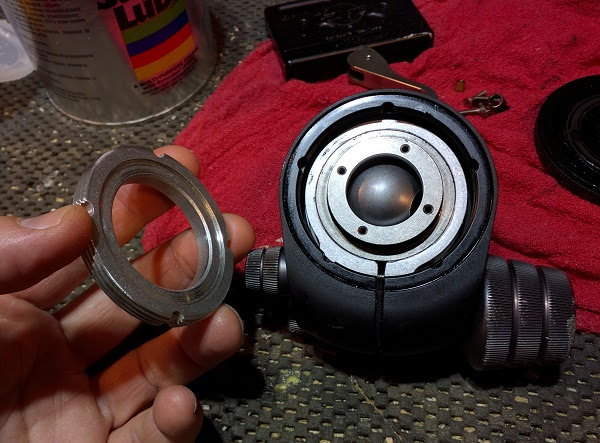 Next there is a round, stepped flange piece that you pull straight out. I didn't get a shot of it by itself, but it's the piece in the center of this image: 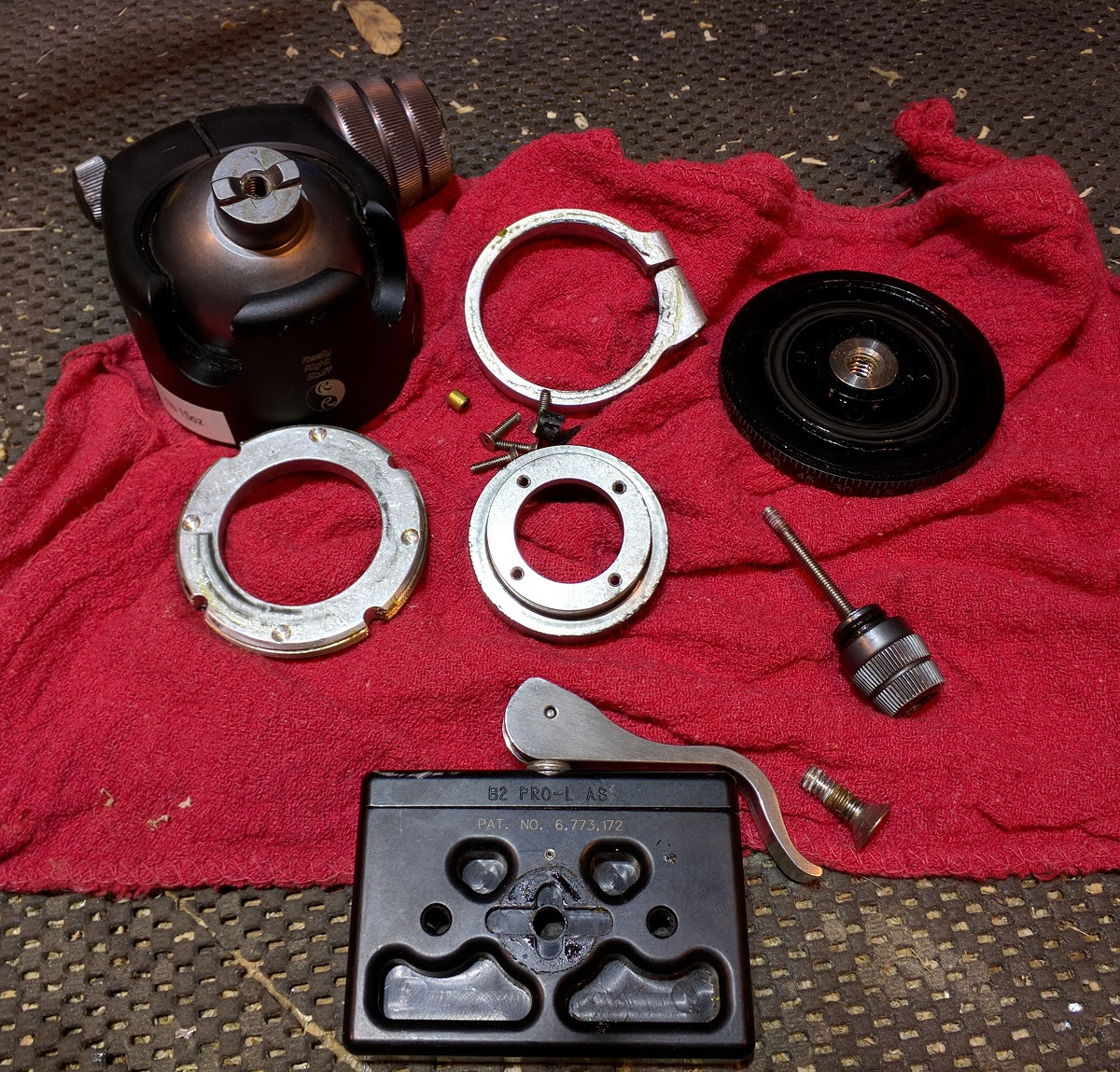 Now, there's a split collar that has to come out. This collar is held in place by the screw (and knob) that locks the panning base function of the ballhead. 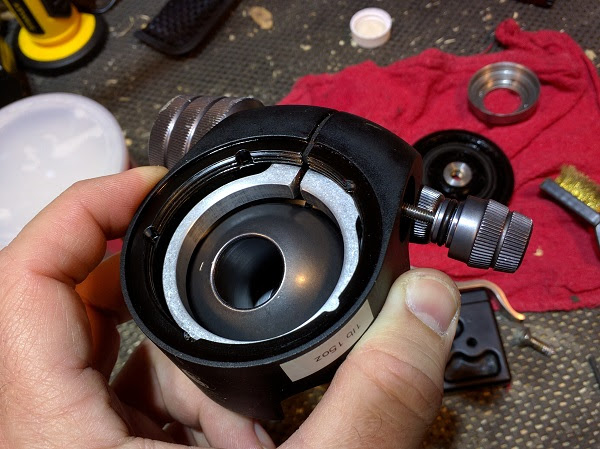 But first, the panning lock knob has to be removed. It has a plastic cap on the end that must be removed. Prying this cap out will likely destroy it, so beware.

After the plastic cap is off, you'll see a screw head down inside the hollow knob. Remove the screw with an Allen wrench. NOTE that this screw is held in place with Loctite. So, it takes some torque to break it free and remove it. If it's too difficult, then you can apply heat to the split collar to help loosen it. 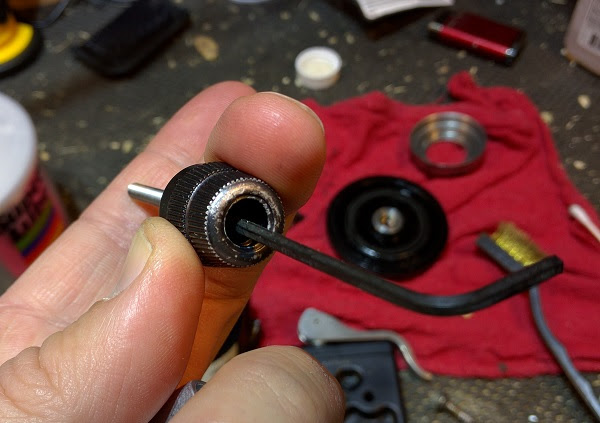 Once the screw is removed, the split collar comes out: 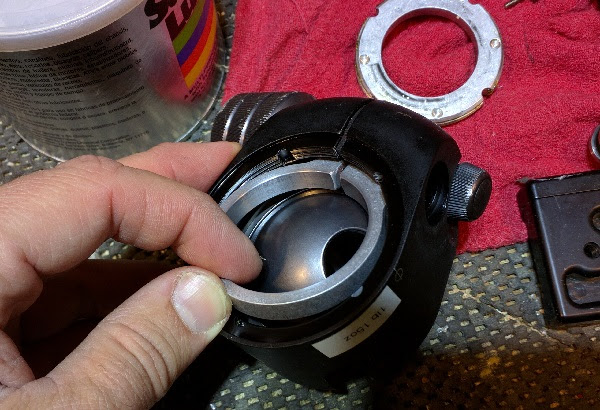 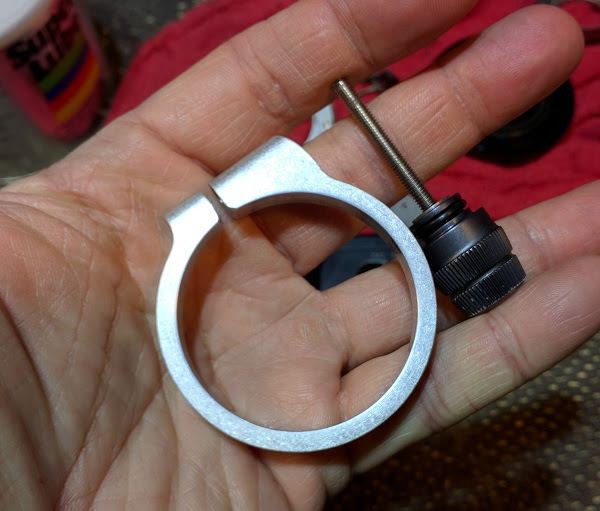 I chickened-out at this point. The next step WOULD be to remove the blind snap ring (aka circlip, or evil metal thing designed by satan). This would be very difficult because unlike normal snap rings that have tabs with holes, this blind one does not and therefore there is no special tool to remove it.

Removing it would be a matter of prying it out with a flat screwdriver or similar tool.

I made a few light attempts to do this, but the snap ring is substantially strong, and I feared that I would scratch-up the insides of the ballhead receptacle and the ball itself. 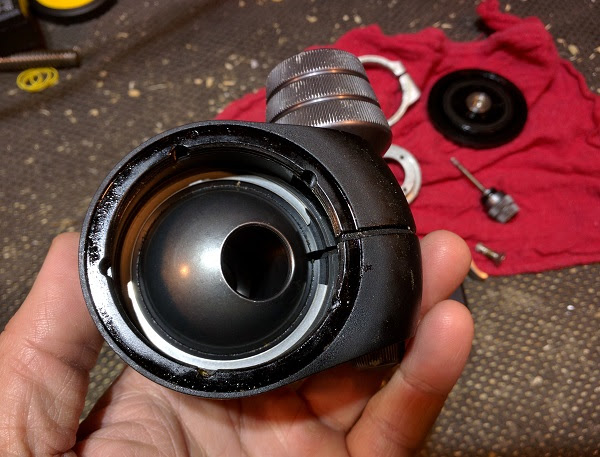 However, at this point, the ball was very loose, and I was able to jiggle it around while using WD-40 and q-tips to clean all the small debris that had collected inside the head. And that was the whole point of this exercise: just to clean it thoroughly inside and out.

Reversing the steps above gets you a clean and fully functioning ballhead again.

Wait... there are a few important details.

Remember the panning lock knob and screw that was held in place with Loctite? This will have to be cleaned (clean the screw and also threaded hole in the split collar) and new Loctite applied. Use Loctite #271 - red.

The red Loctite is supposed to set up in 10 minutes. I waited a few hours just to be sure.

I didn't mention it above, but the panning base has lube inside of it. New lube will have to be applied. I used Super Lube All Purpose Grease. (remember, only the panning base parts get lubed; the ball itself stays dry). 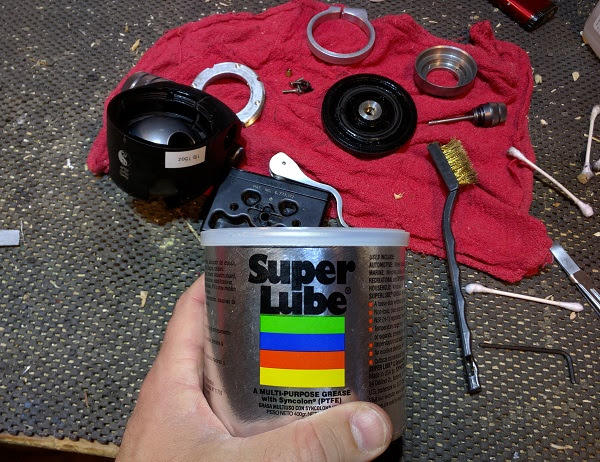 Post adjustment, the ballhead worked perfectly. It panned snugly and the ball dipped down into the two front slots with ease. And it looked much better all clean and fresh.

Throughout the whole process I was continuously impressed by the build quality and design. It really made me appreciate the good design and engineering that went into it, and I certainly can understand the price. In fact, I'm kinda surprised how low the cost is considering what goes into these things.

For example, I removed the ballhead lock screw and discovered a set of bearings where the knob makes contact inside the ballhead frame. This is quite a nice touch. 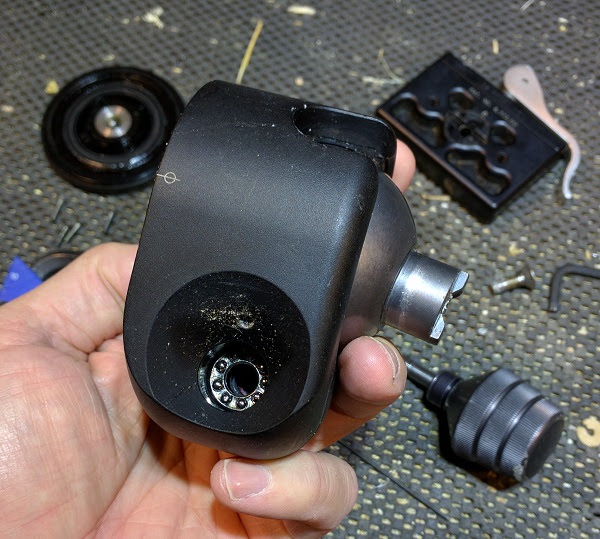 I'm an engineer and a geek and I love this kind of stuff. This info will serve for future reference. I'm pretty hard on my gear and drag it around outside in dirty places, so I'm sure I'll be cleaning it again at some point.

Last November I visited Death Valley with several photo-friends. It was a week to get away and see the landscape, and to focus on photography for a good, long while. Shooting in the dunes.

This wasn't a workshop or a group shoot or any sort of formalized event. It was just six friends getting together and having fun. And we had loads of fun. 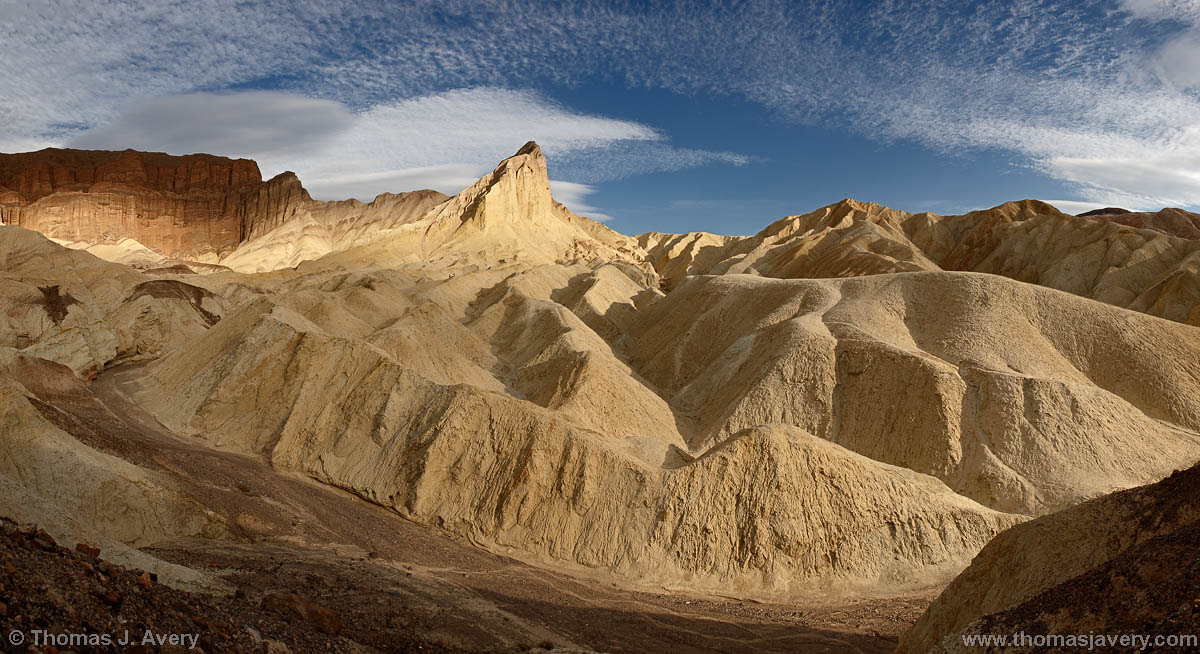 Editing and processing the images has taken forever. There were thousands of photos to sort through, and I'm finally finishing up. 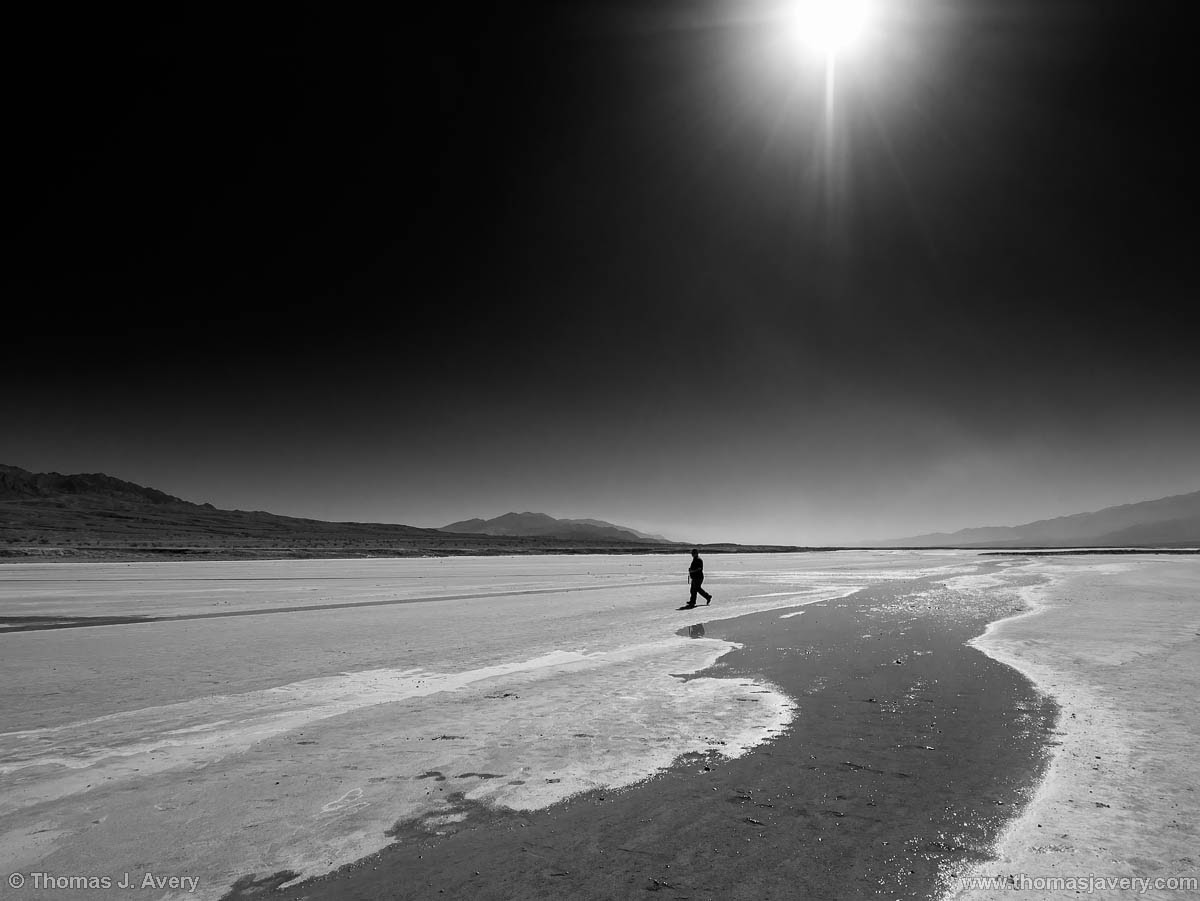 Scouting in the valley.

I'll post more about this trip later. We visited and explored some great places. I've only been to Death Valley once before, and my knowledge is fairly limited. But we did get to see a lot of new stuff (for me) on this recent trip.

And we got to experience some very interesting weather. High winds, heat, cold, snow.... and a rocket launch. More about that later.

The real purpose of the post yesterday was for me to think about my storage plan. The numbers I generated yesterday, aside from curiosity, can help me figure out a plan... or at least make me panic about it.

Real quick disclaimer: everyone has different methods and practices when it comes to storage of their files. My way is just that. My way. It isn't wrong or right.

My goal for storage and archiving of my files is to have four independent copies. I.e. four independent devices that contain the files, with the devices being in physically different places (in my case - split between two locations: home and work).

I'm currently not there yet. I have three independent copies. Two at home and one at work. And that's okay. It's better than two (total) and certainly better than one.

So, in deciding how much more storage (hard drives) to buy, I can put some thought into the size of the drives and timing, i.e. how much longer until they fill up, and then compare that to whether or not I want to start buying larger hard drives.

From the post yesterday, my current collection of photos sits right at 1 TB. note that I'm leaving out all the OTHER files (edited images, music, personal stuff, etc); all of that sits on yet another set of hard drives

How long until it's full? ESTIMATE 1

Based on generating an average of 154 GB worth of images over each of the last 5 years, I have until about 2020 until the drive fills up.

How long until it's full? ESTIMATE 2

Let's guess that I upgrade my camera to a higher MP model. I'm probably NOT going to do this, but let's just say I got the new 50 MP Canon 5Ds.

Keep in mind this is just a rough estimate, and there are too many variables to make an accurate prediction.

I think the easiest thing right now would be to get another 2 TB drive. That would fulfill my goal of having 4 independent copies of my photo collection, and it will serve me for another 2 - 5 years depending on the camera bodies that I use.

Once I reach capacity on that system, then I could double-up drives and add new ones with 2x capacity. I.e. existing 2 TB drives combine to form one independent 4 TB unit of storage, and then I'd have to buy four 4 TB (or higher) drives at once.

Ouch. Hopefully by then memory will be much cheaper.

Nope to optical storage as one form of backup. Been there, done that. Hate it. Pain in the ass.

Nope to the cloud. Too much trouble and expense at this point plus security issues.

Buy an enterprise-grade drive and put it in a Faraday cage? I like the idea, but it's beyond my budget.

Not a big fan of RAID. I've used drive arrays controlled by some level of RAID, and I'd much rather keep my system as simple as possible.
at February 02, 2016 No comments:

After 15 years of making images from digital cameras, I'm finally reaching the 1 TB mark. It's kind of weird... I expected my total collection of files to be much more than 1 TB. Most of my peers have collections that are 4, 5, 6 or more TB.

I started with a 1.3 MP camera (shooting JPG), and now it's 22 MP shooting mostly raw images.