I spent this past weekend in the Texas hill country hunting. There was a quarter moon and fairly clear skies at night. The good parts of the Milky Way are below the horizon this time of year, but a healthy band of stars can still be seen.

Despite the moon and the time of year, I tried my usual astro/landscapes and also some new approaches.

The above photo and the one just below are simple shots much like I've done in the past. They both have a main subject that dominates the foreground. The focus is set on the main subject, so the sky and stars are just slightly out of focus (that's not apparent in these web-sized images, but it shows up on a print).

I'm continuing experimenting with light-painting using a LED flashlight with an orange gel filter. The effect of the painting is subtle; it fills in and creates a little bit of detail in the shadow areas.

Shooting while a moon was up was new to me for this type of shooting. Since it was only a quarter moon, the light didn't overpower the scene and a lot of stars showed up in the photos. But the moonlight illuminated the main subjects nicely and also made the skies a lighter shade of blue as compared to moonless night shots.

Now here is where I'm attempting to progress this type of work. I used focal lengths longer than 24mm and shutter speeds longer than recommended for freezing the stars.

This shot (above) looks up into the tree from the first photo in this post. It is meant to be a simple silhouette of crooked, bare branches, but the moonlight and also light from the LED flashlight help pop some detail out of the shadows. The branches are fairly close to the camera, and the focus is set to the middle of the tree. Combined with the longer focal length and wide aperture, the stars make a nice out of focus background.

Now here's the interesting thing: this was a 25 second exposure. If you were to shoot the stars, in focus, with 50mm, then you would need about a 10-15 second exposure to not have noticeable star trails.

Since the stars are out of focus here, the trails are not noticeable despite the long 25 sec. exposure.

You can see that the out of focus blobs are larger and slightly oblong. This was facing due east, so apparent movement of the stars is higher than if you were facing north. This obviously shows a bit of trailing, but since the stars are not sharply focused, the end effect is quite nice, IMO.

This photo (above) was taken facing north. The out of focus stars are slightly oblong on the outer edges of the frame, but not as noticeable as the previous photo.

Also, this photo was taken very early in the morning after the moon had set, hence the darker skies (as compared to the other photos). It was also taken at f/2.8, the maximum aperture of that lens, so it's about a stop darker than my usual exposure. I should have pushed the ISO to 6400 for this one.

Email ThisBlogThis!Share to TwitterShare to FacebookShare to Pinterest
Labels: Astrophotography

I have finally finished processing, editing, and uploading my photos from my 10-day trip to Big Bend last October. The gallery can be found here. 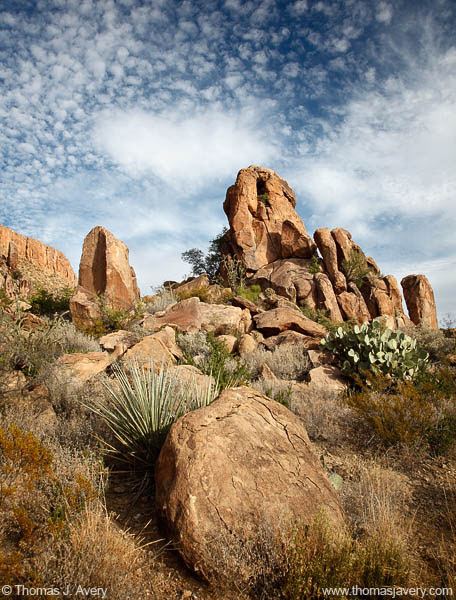