Here's a fun series of the same scene shot with different lenses. 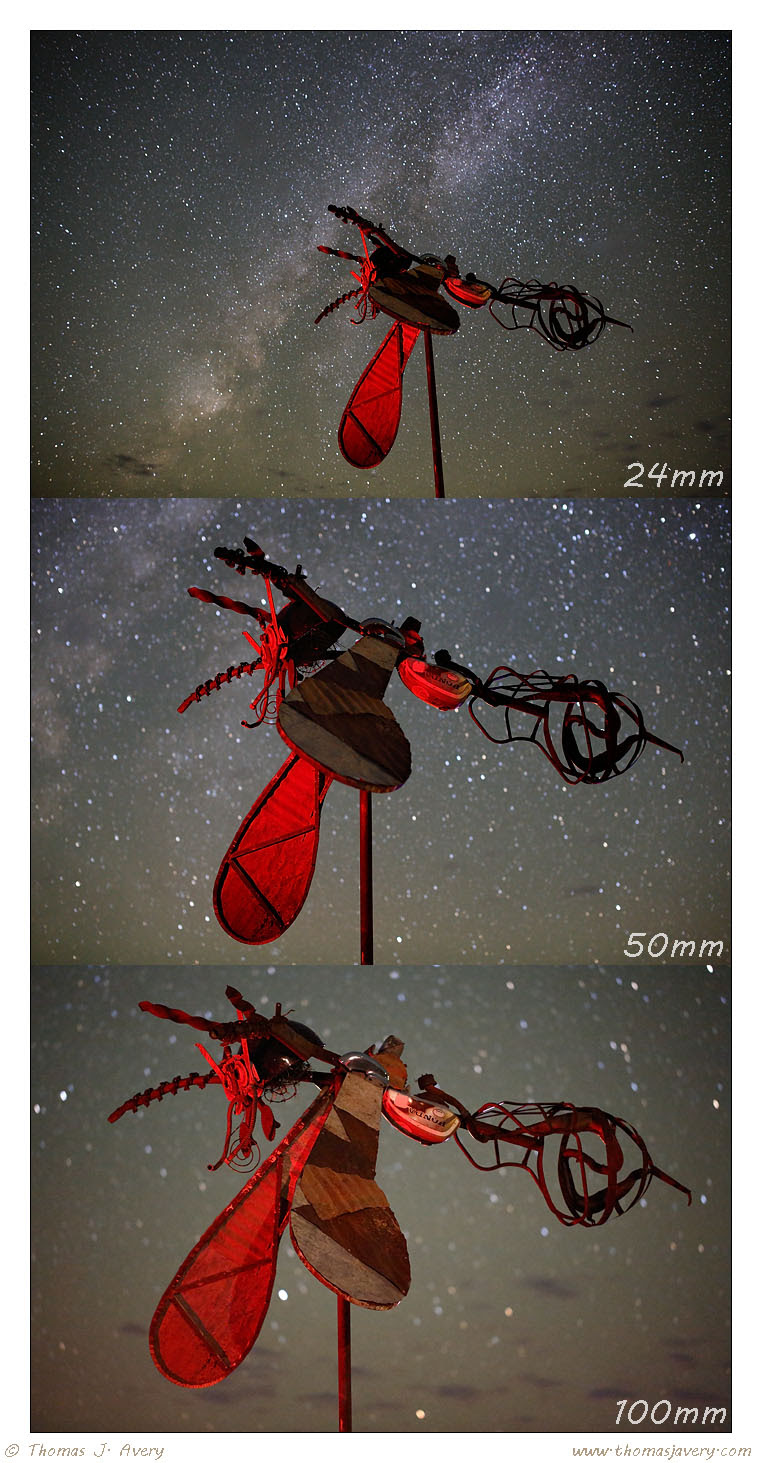 Email ThisBlogThis!Share to TwitterShare to FacebookShare to Pinterest
Labels: Astrophotography

I had an opportunity earlier this month to shoot along with a Nikon user (Dave Chudnov) that had a D800e. I also was able to put my new 5D mark III to use shooting high ISO scenes.

This is a quick comparison of three cameras at ISO 3200. Both the 5D cameras (mark II and mark III) are mine. All shots were taken at about the same settings using the same lens (A Canon 24mm f/1.4L II on the 5D's, and a Nikon 24mm f/1.4 on the D800e). Dave sent me some of his RAW files so that I could process them along with my files and make a good comparison. 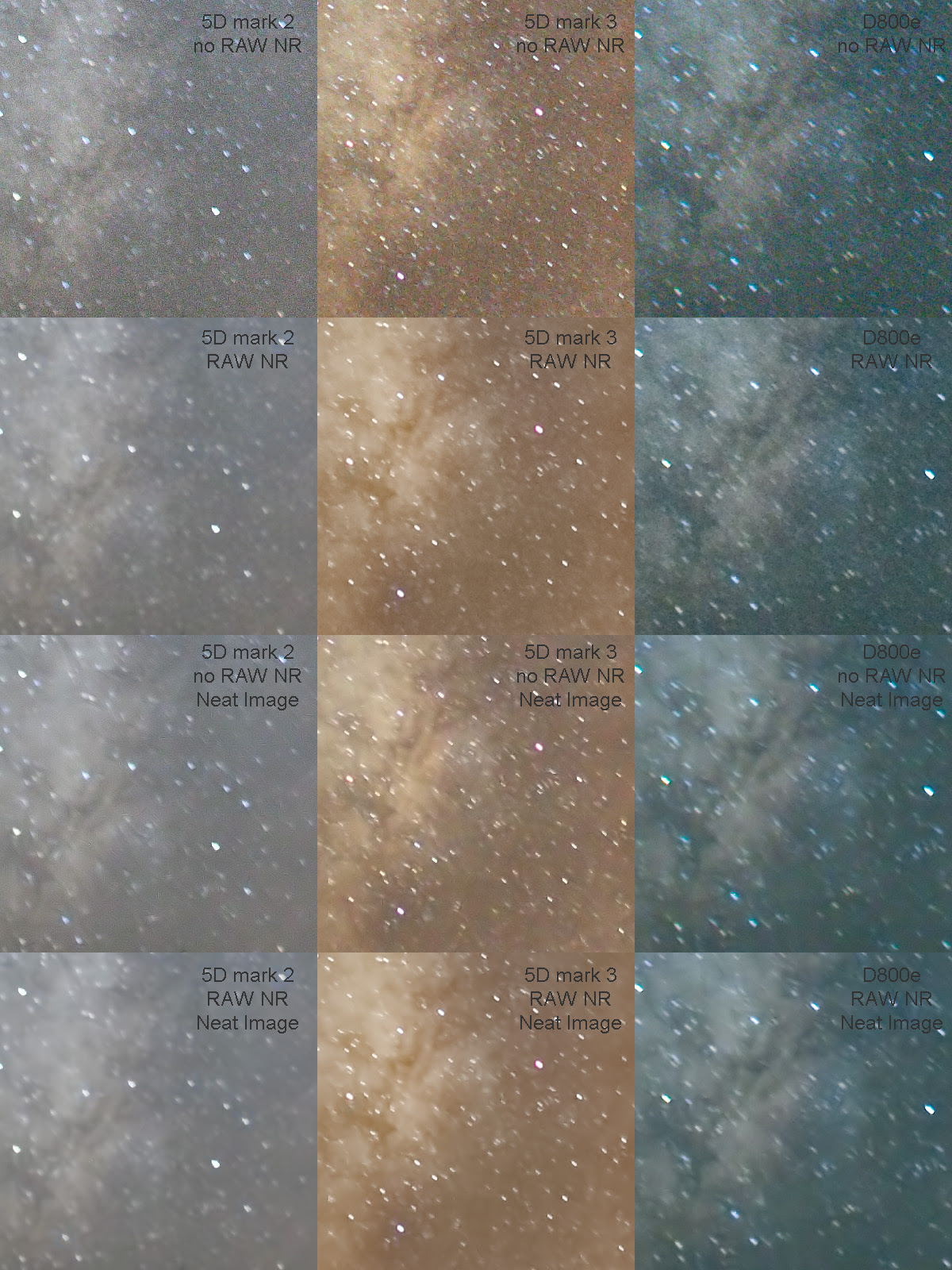 The samples are all 100% crops from about the same area on the photo. The overall photo for each of the samples is basically the Milky Way on a dark clear night in Big Bend National Park.

Also, just for comparison, is a reduced, side-by-side comparison of the 5D mark 3 and Nikon D800e: 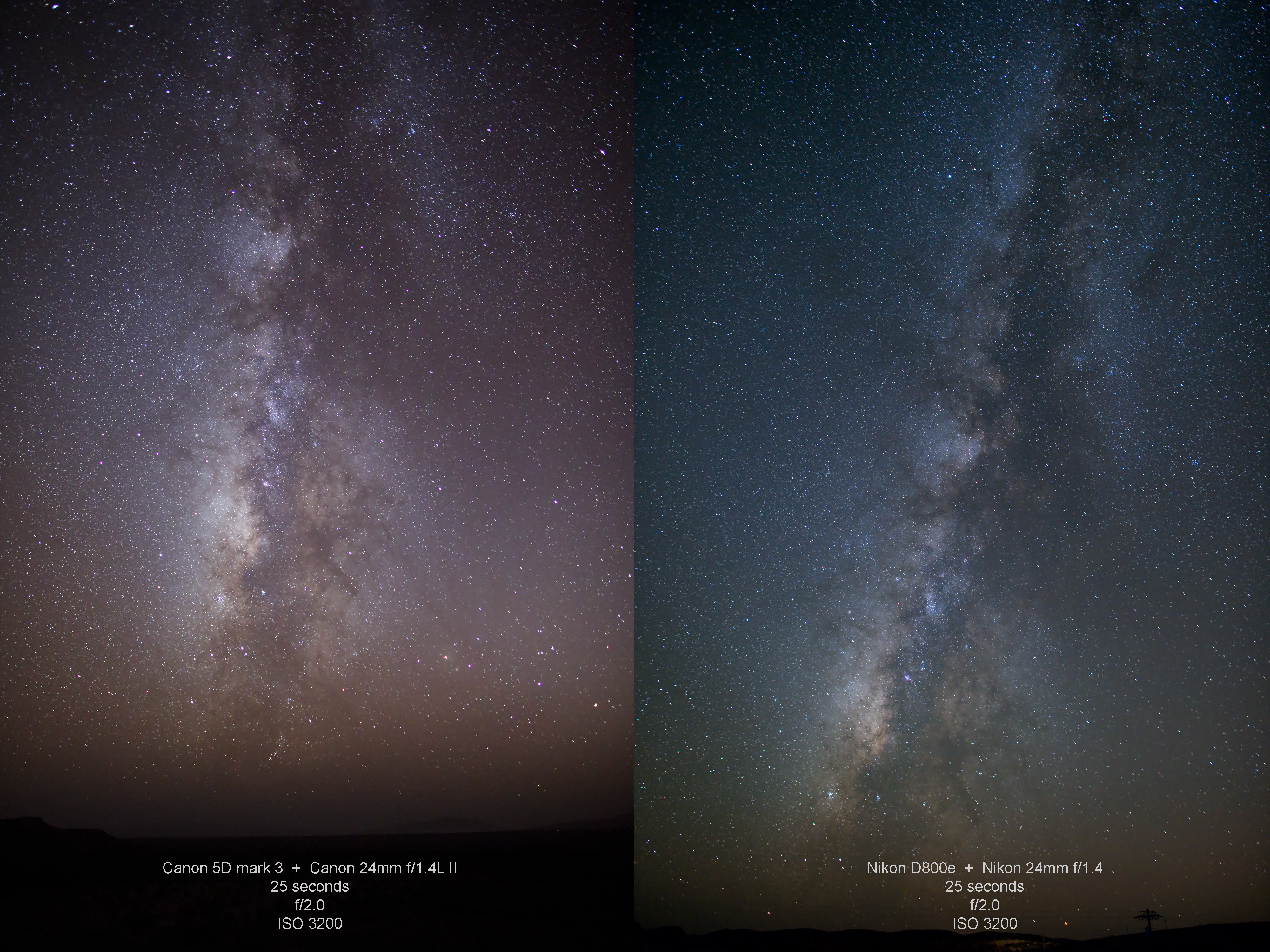 This test attempted to keep the variables the same per shot, but there are some slight differences. And there's the obvious difference in resolution amongst the cameras: 21MP for the 5DII, 22MP for the 5DIII, and 36MP for the D800e.

My take on it is, after considering the final output and real world applications, there's not much difference between any of them regarding high ISO noise performance.

This is a little disappointing considering the two Canon models. I'd hoped that the sensor in the 5D mark 3 would have had better noise performance than the 5D mark 2. What I'm seeing in files between the two cameras is that they're essentially the same at ISO 3200 in a 25 second exposure (ignoring the obvious color balance differences between shots).

I had expected a significant improvement. Canon had about 4 years between models, and they did not increase the pixel count by much. Following the general trend in sensor technology, you could easily assume that the 5D mark 3 would have much better high ISO performance than the 5D mark 2. But this has turned out to be false.

The jump between the original 5D and the 5D mark 2 was a significant improvement. The mark 2 had nearly double the megapixels, and the high ISO noise performance was at least 2 stops better!

I don't know what Canon has done (or NOT done) in sensor technology going from the mark 2 to the mark 3. Perhaps the advancement is mainly with the video side (something I don't do).

I've also had a chance to inspect my other photos from the 5D mark 3- my daylight landscape photos shot mostly at ISO 100. What I expected here was an improvement in dynamic range. It's not that the 5D mark 2 had poor DR. I was pretty happy with it. It's just that the general trend in sensor technology lately has seen increases in the DR capability of sensors at their base ISO settings, and I expected that the mark 3 would have a bit more DR than the mark 2. This is not so. Both cameras seem about the same.

My conclusion is that I'm very disappointed, and if I'd known the mark 3 was going to perform at this level, then I wouldn't have bought the camera. I'm, however, quite impressed with the upgrades to the body, AF system, menus, etc., but it's not worth it to me considering the lack of improvement in sensor performance.

Considering the high megapixel count of the Nikon D800e, I'm very impressed with its performance. The noise is no worse than the 5D 2 or 3, yet it accomplishes this with 60% more pixels.

I flirted with the idea of switching to Nikon. However, I don't think the improved performance of the D800 is enough to justify the switch, especially considering the substantial investment that I've made in Canon-mount lenses and the amount of money I'd lose in switching systems.