This image was taken in the Terlingua Ghost Town on my recent trip to the Big Bend area. My photo-buddy, Wes, and I spent several hours in the dark shooting the ghost town one evening after dinner. 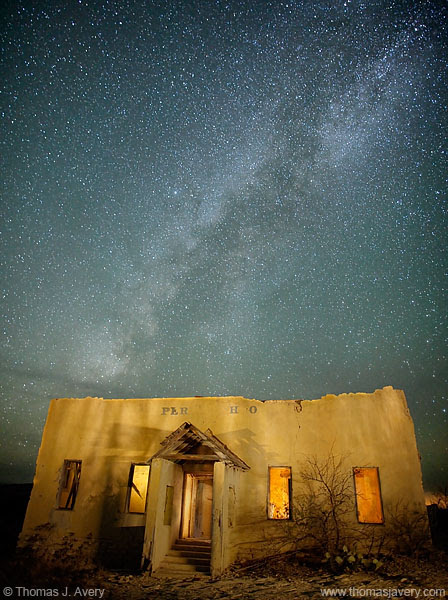 The approach to this scene was straightforward and simple: front of building + Milky May. I took a couple of test shots to find my composition (trial-and-error camera placement) and determine how the ambient light was hitting the building. The light from the neighboring structures (the ghost town is still inhabited) was faintly illuminating the old school.

Wes and I decided that it needed more light, and that it would also benefit from some internal light. We both took several exposures, each with a different light painting scheme.

My first exposure was with only ambient light and no light painting. I then took several where I light painted the exterior of the building from different locations and different patterns.

I actually had to light paint twice in each shot because Wes was shooting at the same Ev but at 60 seconds (about twice as long as my exposure). We'd trip our shutters at the same time, I'd then paint a little at first, then paint some more after my shutter closed and Wes' shutter was still open.

The shots with light in the interior of the building were tricky (mainly because the flooring was in bad shape and we had to carefully negotiate our way through on half-rotten floor joists in the dark). Between the two of us, we had enough small LED lights (covered with #204 orange gel filters) to place them inside the building to shine through four window openings and the doorway. The lights were left in position and turned on during the exposures. It took many tries and different light positions, but it finally worked.

I combined three different exposures in Photoshop to get the final result you see here. We actually spent so long working this scene that the Milky Way shifted significantly. I used the sky from my first photo (the ambient shot), the light-painted building exterior from one of the subsequent shots, and also the last shot with the interior lighting.

In 1942, Ansel Adams visited the Big Bend area. One of his images was taken from an informal viewpoint along Old Maverick Road. If you do Google search for "Ansel Adams Burro Mesa", you will find the image that he shot from this spot. (here's a direct link to the photo: ccp.uair.arizona.edu/item/11570)

This location can be accessed on the west side of the park. It is 2.6 miles south of the west entrance booth. There is a hill on the east side of Old Maverick Road. The summit of this hill is where Ansel Adams stood almost 70 years ago. 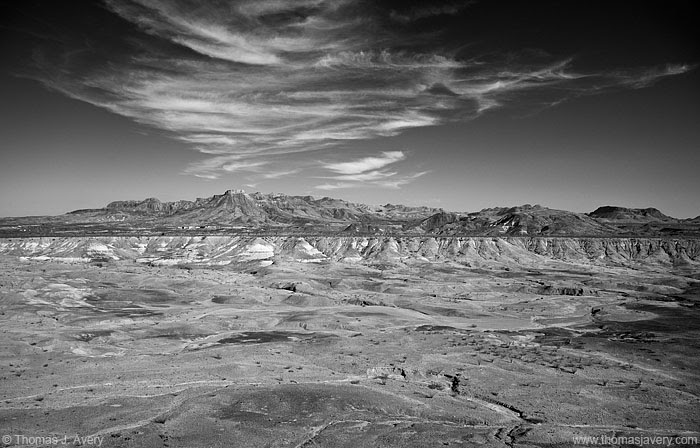 I've shot from this location a few times before, but I've never seen nice clouds like this while I was there. On the day this photo was taken, a strong cold front was moving through, and the wind was blowing in 30+ mph gusts. The front had initially cleared out the sky of all clouds, but mid-afternoon, a set of high cirrus clouds developed overhead and then quickly moved east just as we were passing by AA's hill. It was a happy coincidence.

My approach to this scene was to capture the basic elements in front of me: the wide arroyo, Tule Mountain (the small, flat-topped mountain near the center), the Chisos Mountains in the background, and the sky. (Just to note- Burro Mesa is in between Tule Mountain and the Chisos.)

And that's it. Simple. Desert, mountains, sky. And I believe that Ansel got it right nearly 70 years ago. This scene captures the essence of Big Bend.

This image was taken on my recent trip to Big Bend on the night before my workshop began. This location is at Dugout Wells, a lush, green spot in the open desert. 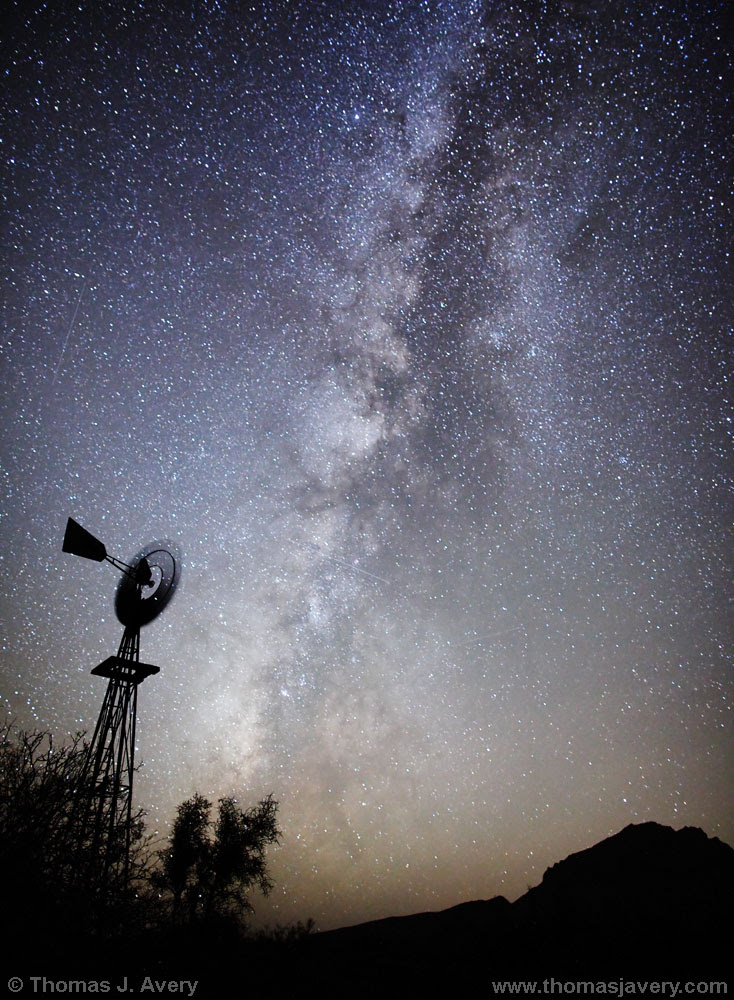 Before leaving for Big Bend, I spent some time thinking about the area and locations to shoot the night sky after sunset. I was familiar with the Dugout Wells area, and I remembered the working windmill there. Silhouetting the windmill against the stars and Milky Way was my only objective with this photo.

On location, I decided to take a wide angle shot to capture a lot of the sky and also some of the horizon. The windmill is small but still a prominent feature in the frame, and Nugent Mountain also appears and adds some interest to the horizon.

This is a location that I returned to with the workshop participants a few night later.

PS#1: Night in the Ghost Town

Note: I'm going to start a new series of blog posts that I'm calling, Picture Stories. This will hopefully give me some inspiration to post more frequently on my blog as well as increase my shooting activity. My friend and fellow photographer, Bob Clark, maintains a blog and basically does just that; he tells stories. And good ones too :-)

This image was taken on my recent photography workshop based in Big Bend. It is just a snapshot taken during the workshop. 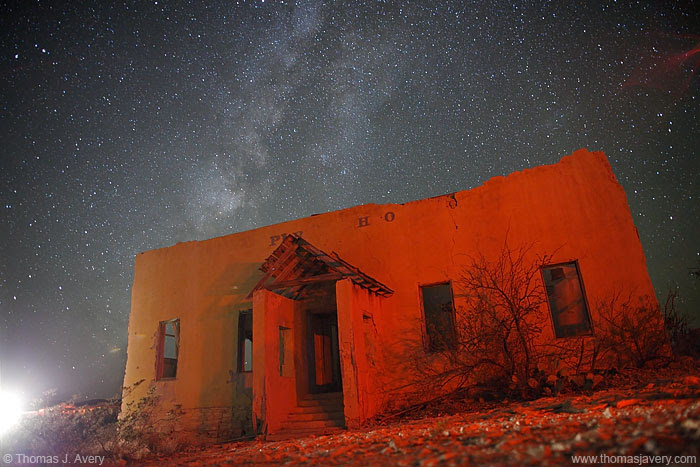 This photo above was taken as a quick test shot to see how the ambient light was registering on the building and determine if any light painting was needed. I wanted the light on the building to balance with the night sky, and I used it to help teach and demonstrate proper exposure to my workshop participants.

This is the old Perry School in the Terlingua Ghost Town (the ghost town is a few miles west of Big Bend National Park). The ghost town has few lights, but still the artificial illumination from distant structures does register on long exposures.

I simply laid my camera on the ground and fired off a shot. During the 25 second exposure, two things happened. The first was that a car drove by on a nearby road, and the light from its headlights blew out a spot on the left side of the photo. The second accident was that two workshop participants walked up to the building while their LED headlamps were turned to red mode.

The resulting photo was a happy accident. I really like it. The lighting is a bit freaky and the tilt of the camera adds some tension and drama, as if the photographer dropped his/her camera and ran off after seeing a ghost or something horrible.

So, in honor of the recent Halloween holiday, I'm posting this photo as the first in my PS series :-)

I'm pleased to report that my first Big Bend workshop went very well. We enjoyed several days of exploring and photographing the park. We had nice, clear dark skies at night and mild weather. 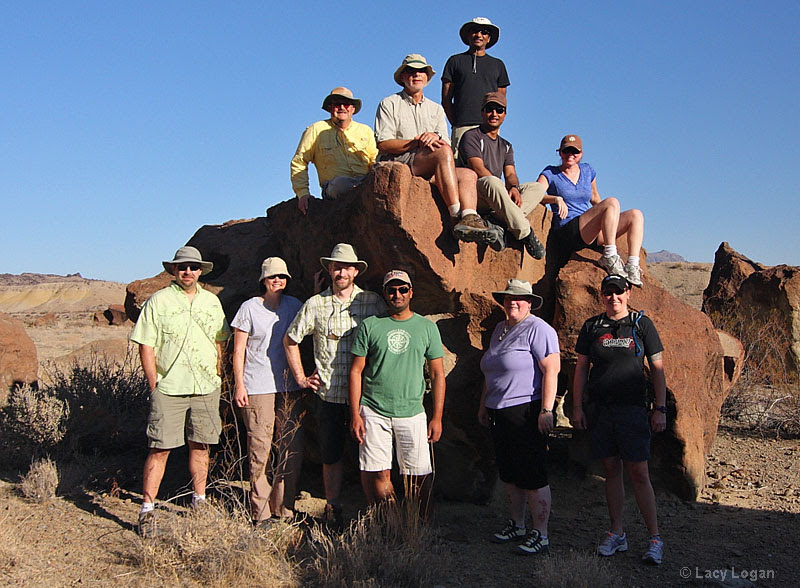 Nine students attended the workshop. These folks came from all over (Michigan, Washington, and even Mexico!). My sister, Lacy, helped by being our workshop assistant. 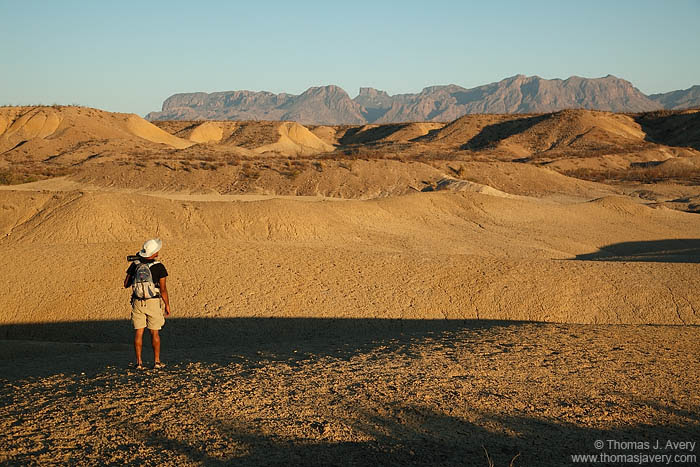 I am working on a workshop report page that I plan to publish soon. This will contain details and information, along with many photos, about the workshop and our activities.

Many, many thanks to all who attended! Your participation and friendship is greatly appreciated